To understand the historical origin of Iberico sausages, we need to look back across centuries of Iberian history as a slow process of development occurred across the peninsula. It's quite likely that the Iberico ham we know today is the most important gastronomic heritage we have from ancient times, predating even classical antiquity.

It's impossible to think of Iberico sausages and ham without thinking of salt. It's known that the use of salt dates back at least to the 3rd millenium BC in Egypt, though it's probably even older. The discovery of salt was a revolution in food because it allowed for preservation with much more flavor. Prior to this, it was only possible to preserve foods by smoking them, which didn't make for nuances of aroma.

Once the technique of salt preservation reached the ears of Iberian herders and traders, it took off in a big way!

Iberico sausages: famous the world over

The first document we have that mentions Iberico sausages - pernae, in Latin - was written by Cato in the third century BC. Cato described the procedure for curing hams and sausages in some detail, discussing salting, marinating and curing practices similar to those we see today.

It's clear that the ham culture Cato was describing was new to him, but already ancient to its practitioners, and we know that to the ancient Celtic inhabitants of the Iberian peninsula, pork was one of the most highly valued table meats and had high economic value. 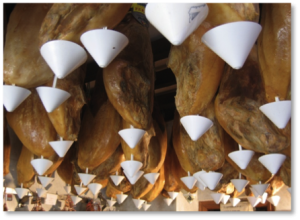 Spanish hams curing in a cellar

After the fall of Rome, it turned out that the Visigoths, too, were partial to ham, and with the arrival of Christianity, ham and pork products generally took on new significance, being forbidden to the two main other religious groups in the Iberian peninsula, Jews and Muslims. As a result of this division, pork butchers were sometimes elevated to the status of defenders of the faith!

Other sausages like chorizo, salami or loin sausage show up in ancient texts to: we can find references to them in Aristophanes, for instance. However, they did not become truly popular until the sixteenth century, when previously unknown spices from the East began to arrive in Spanish ports,including pepper and paprika.

Paprika, a vital ingredient in many Iberico sausages

It is from this moment that Spanish chorizo began to stand out from the similar products of other countries in Iberia. The innovative flavor, aroma and red color that accompanied the use of paprika as a major ingredient meant that these products became much sought-after. Regions also began to diversify and specialize, each one being famous for its own unique sausages, something that is still true today.

There are numerous historical anecdotes referencing the popularity of Iberico sausage, including one about Alfonso XII who was passionate about Iberico salchichon and always made sure to buy several kilos whenever he was in Vic.

With the advent of the Industrial Revolution and the emergence of devices such as the grinder and stuffer, together with the discovery of techniques to improve the preservation of raw meat and other materials, the Iberico sausage industry was transfigured. Most of the change was in quality rather than speed, however, since it's impossible to make a real Iberico sausage fast! If the traditional steps aren't followed, the result simply isn't up to standard. 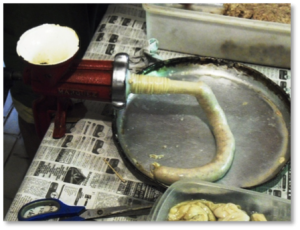 A grinder and stuffer for making Iberico sausage

In fact, scientific and technical advances have allowed producers to create ever-better sausages. Partly this is due to scientific study of traditional methods, enabling producers to streamline and focus their methods on the practices that work the best. Now, from field through slaughterhouse to sausage, the best combination of species, time and seasonings are known far better than before.

However, it's still the traditional curing process that makes an Iberico sausage the product that millions love all over the world and a hallmark of Iberico culture.