Enjoy the best Iberico and Serrano Ham  Visit our shop!
The year 2014 began with a very important change for the Iberico ham product sector and consumers. The Spanish Ministry of Agriculture, Food and Environment passed a new Law that regulates everything related to Iberico ham. From the selection of the pigs, the type of breeding, feeding, slaughtering and processing of the Iberico ham.

The new law aims to make all production processes as transparent as possible by following more stringent measures of traceability. This will make easier identification on the origin of the final product and thus establish the product's degree of quality.

These measures were made necessary by the increase in misleading and false advertising and labelling. This is reported by butchers who do respect and follow the rules by offering total transparency during the production process.

The new law is intended to strengthen the image and prestige of the Spanish Iberico ham products around the world.

But, what factors in the new law are used to determine the different degrees of quality? First of all, taking into consideration the pig's racial purity: it can only be called Iberico ham if it comes from a 100% Iberico pig or comes from a 100% Iberico female crossed with a 100% Duroc male, in which case you must specify the percentage of each part of the genetic mix (50 %, 75% or 100 %).

In regards to the sources of origin granted to the different producers there has been no change. They remain four in number and make reference to the geographical area where the pigs are bred and the hams are processed: Valle de los Pedroches, Huelva, Dehesa de Extremadura and Guijuelo. 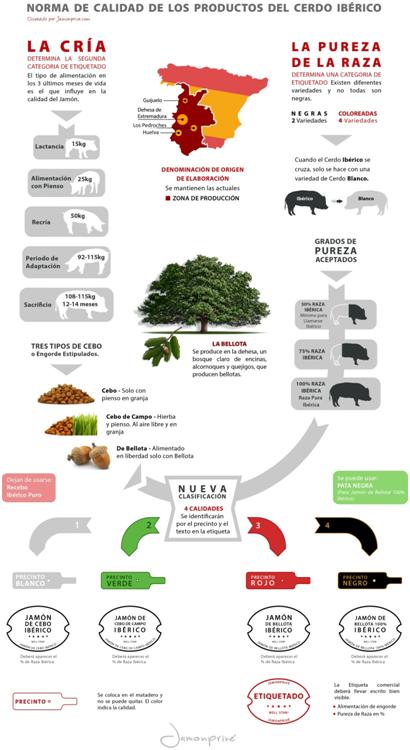 The other factor being considered is the type of nutrition the pig receives during the fattening period, and it is of vital importance due to the fact that former denominations have changed from "pure Iberico" or "de cebo". Once the pig reaches the 25 kg during its fattening period, the quality of the meat is determined based on the pig's nutrition, especially in terms of infiltrated fat.

Finally, and still the highest quality comes from the Iberico ham de bellota, referring to a type of fattening exclusively on acorns and other resources found in the meadow, therefore a free range diet.

Therefore, the degree of quality of the Iberico ham depends solely on these two factors: the degree of genetic purity and the type of feeding the pig received during the fattening period. Due to this, the new law introduces a new end labeling system that should specify in a clearly visible way the percentage of Iberico genetics and the type of feeding, as mentioned above.

These labels are integrated with a few tags that should be placed at the time of slaughter with other measures of traceability placed upon breeders. There are four colors that indicate the various degrees of quality of the Iberico ham: