Enjoy the best Iberico and Serrano Ham  Visit our shop!
Iberico ham is a product of high yield, which can occasionally lead to time passing between the first slices removed until only the bone and the meat stuck to the bone are left. For this reason it is very important to know the secrets and tricks to preserve the Iberico ham in the best possible condition.

For optimal preservation there are a few steps to follow during the trimming of a piece. Once the desired slices have been removed, it is necessary to know how to preserve Iberico ham.

It is important that the area where the slices were removed be covered and not exposed to air. You can cover the area by utilizing excess skin and fat to cover the surface of the cut area. In years gone by, the use of olive oil or cayenne pepper were used to ensure preservation.

In the case of Iberico ham these items aren't needed as the ham has been through a long process of drying and curing, and the use of the ham's own fat is more than sufficient to preserve it. In this regard, it is important to cover the rest of the Spanish ham with a dish cloth or a cotton rag. 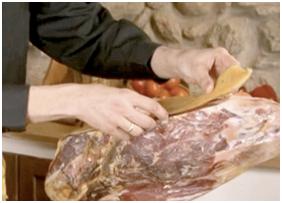 Cover the area of trimming with skin and fat

In addition, it is recommended to hang the Spanish ham from the hoof in a cool and dry place with a temperature between 10 and 18 degrees Celsius. These conditions are usually found in cellars and pantries. However, some people choose to cover it directly on a jamonero (ham holder).

Which ever way you decide to do this, it is of utmost importance to never cover with plastic wrap as the Spanish ham will sweat and will ruin it's flavor. Every time there is a time gap between trimming slices of ham, you must remove the top superficial part as it will harden and its taste will be bitter.

It is important not to cut more slices than will be consumed, as it is difficult to preserve the organoleptic properties of the cut slices. If for some reason you have more slices than what can be consumed, the best way to keep them is by wrapping the slices in wax paper, and refrigerate during the days needed.

In this case, it is important to let the slices warm to room temperature so the texture, smell and flavor will approximate freshly cut slices. 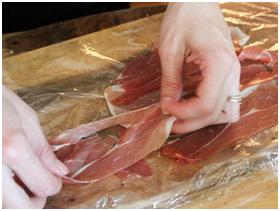 Store slices in wax paper and keep in the refrigerator

Many people prefer slices that have been vacuum sealed then the ham is stored in a refrigerator. If this is the case there are a few factors to consider before consumption. First of all, the Spanish ham must be eaten while it’s at room temperature (around 21 C), so it's necessary to remove the ham from the fridge and let it sit for a couple hours before it is eaten.

This will ensure maximum flavor and enjoyment. Also, take the ham slices out of the packaging while letting it sit at room temperature. The vacuum sealing is a great way to preserve Iberico ham, however it will cause alteration of the ham's organoleptic properties, which the slices can fully recover while exposed to ambient temperatures.