Enjoy the best Iberico and Serrano Ham  Visit our shop!
It's no secret that Iberian ham is the culinary star during the holidays in Spain, whether eaten as a family for personal consumption, or when it is given as a gift that is truly premium in all respects. However, sometimes the question arises as to which ham to buy and which has the best appearance and taste, which will depend on the purity of the breed of pig that the product we buy comes from.

To start off with, it is important to know that there is a regulation governing the pig sector in Spain (Royal Decree 4/2014), which was updated a few years ago and allows ham to be sold with the title "Iberian" even when the purity of the breed is only 50%. This occurs, for example, when stallions from the Duroc breed from North America are crossed with mothers that are of a pure Iberian breed.

In other words, a large percentage of hams are sold everyday with the name Iberian, even though they're not 100% Iberian pigs.

If we look even farther back in our history, in the Herd Book, there were reproductive mothers that were registered and certified as Iberian based on their phenotype (physical characteristics), a visual evaluation, and without taking into account their parents - thus questioning and endangering the purity of the Iberian breed.

On the other hand, the Spanish Association of Iberian Pig Breeders (calle Aeceriber) manages the Herd Book for the purebred Iberian breed and this institution ensures that only animals with a known genealogy can be registered (with at least two ascending generations) for the production of products that are labeled as 100% Iberian.

Nevertheless, an annex in the document allows for the incorporation of females as pure Iberian through a visual evaluation, despite not knowing who the parents are.

Currently, according to the 2014 regulation, it is required that the labels on the pieces of ham include the product's percentage of Iberian breed, which can be 100%, 75% or 50%; Back in 2007, ham was classified in a dichotomous way as "pure Iberian" for those that were 100%, and "Iberian" for the remaining products that were the result of other crosses.

Going even further, some experts believe that the most appropriate thing to do would be to only use the word Iberian to refer to ham that is 100% pure Iberian, which is actually a low percentage of all the products available on the market (approximately 10%). 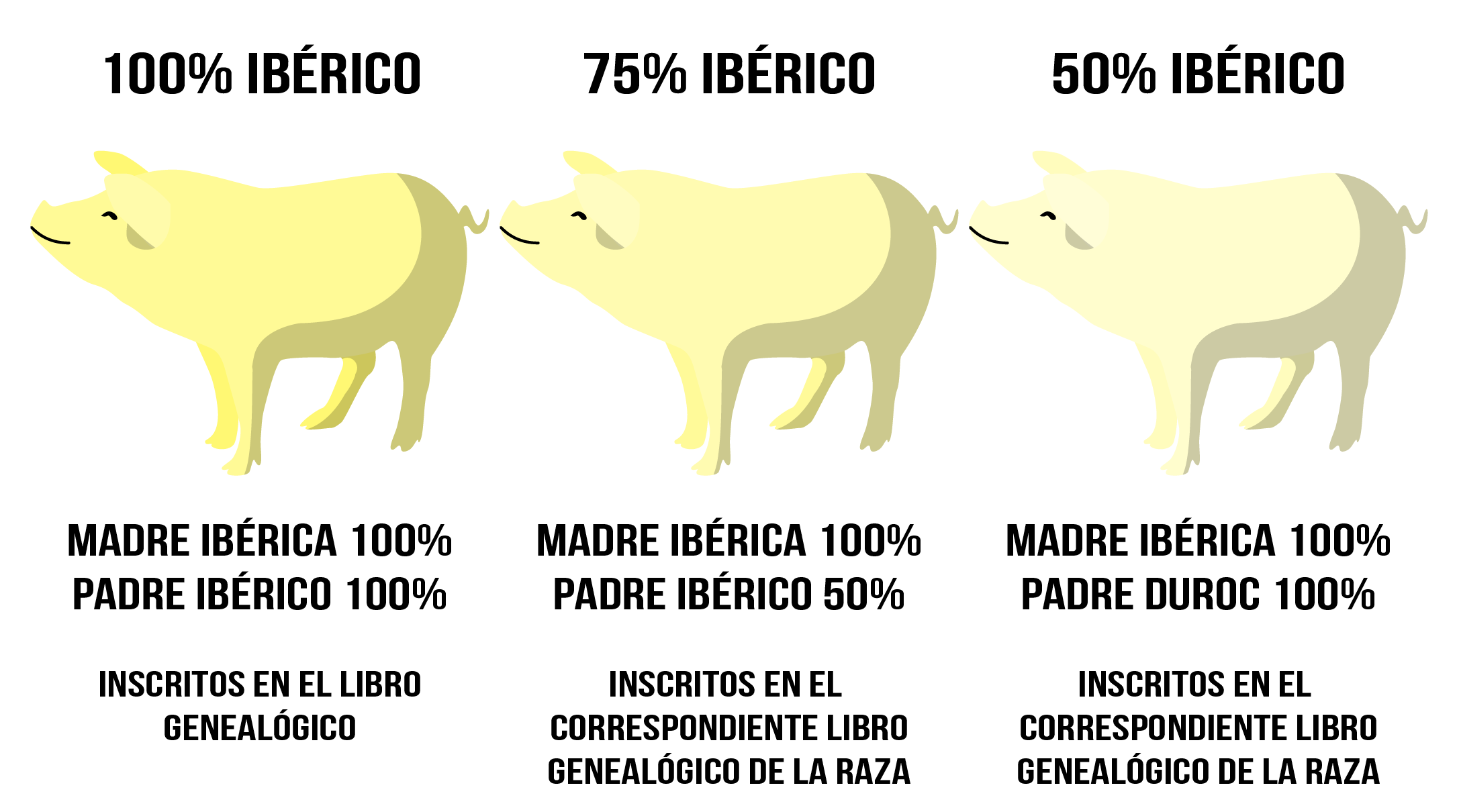 Following the current regulation, the use of coloured seals was implemented to identify hams based on their breed, either 100% Iberian or crossed Iberian, and the animal's feeding system (acorn-fed, free range grain-fed, or grain-fed), according to the following colours:

It is important to emphasise that, the higher the purity and the better the animal's diet, the greater the quality of the product and therefore its cost when it is sold. Therefore, knowing the true origin of the product you purchase and its level of purity will guarantee that you're buying the ham you want and that it meets your expectations.