Since the recently approved law on quality of Iberico ham in Spain, there are various categories of quality for the different types of Iberico ham. These measures have been taken by the government seeking to combat misleading and thus strengthen the production of quality Iberico hams.

The introduction of tracking should allow consumers to indentify at all times the origin of the product, as well as the type of nutrition the pig received and the percentage of Iberico purity.

Types of iberico ham according to purity.

In fact, this classification is based primarily on two factors: the genetic characteristics of the pig and the type of nutrition received during the fattening period. In regards to the genetics of the pig, producers are to specify the percentage of Iberico genetic, which can be no less than 50% of Iberico race and 50% white duroc.

In regards to the nutrition the pig received, it is considered that acorn-fed pigs yield higher quality Iberico hams, because it comes from a pig that has been fattened exclusively in a green pastured regimen.

These pigs feed on acorns, roots, pasture and other resources present in the Dehesa. There are two other categories for Iberico ham: Ham of cebo de campo, which refers to the animal fattened with a combination of outdoor pasture and grain feed in a farm. Iberico ham de cebo, refers to pigs fattened exclusively on grains. 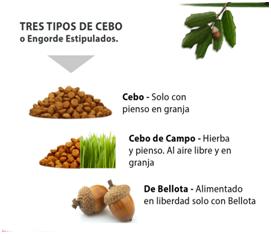 These rules also apply to shoulder cuts extracted from the front legs of the pig. These cuts are also identified with color labels corresponding to the type of nutrition the pig received. These labels also indicate the degree of Iberico purity of the pig.

Without doubt, the new classification of quality for the different types of Iberico ham, slows down the emergence of misleading advertising and it is aimed at protecting those manufacturers that strictly follow the guidelines outlined in regards to the genetic selection of the pigs and the type of feeding received.

This measure should increase the quality and prestige of Iberico hams, as well as strengthening its presence, both in Spain and at the international level, in the gourmet food sector.