Before reaching the consumer, it's highly likely that a group of experts have already subjected the ham to a tasting process based on a set of established quality criteria. The tasting is carried out by a committee of experts in sensory analysis, composed of judges, experts and a jury or panel of selected tasters, who have been trained and educated in order to participate. There are rules that exist in order to systematise the analysis, which has three phases: visual and tactile (appearance and texture), olfactory (differentiating smells) and gustatory (taste).

The samples are coded and the results from the tasting are written on a sheet with the corresponding scores for each of the different characteristics. The total sum of points is what determines the final quality of the product. Now let's review a few concepts associated with a ham tasting.

What are the phases of an Iberian ham tasting?

First off, the general shape of the piece is evaluated. The ham is evaluated before it is cut, taking into account its shape, size, size of the ankle, appearance of the hoof or appearance of the rind and any irregularities it may have. The following aspects are looked at:   Then the fat is evaluated. As many already know, the Iberian pig is a species that accumulates a high content of fat that is found in subcutaneous (bacon), intermuscular (butter) and intramuscular (marbling) deposits. Its composition is determined by the pig's diet, as pigs fed under a "montanheira" system, that eat acorns and grass, have a high content of unsaturated fats. Thus, the following is evaluated: The intense yellow of the piece on the outer layer indicates a long maturation process. Fluidity and elasticity are symptoms of a high presence of unsaturated fats, the result of a diet rich in essential unsaturated fatty acids. The shiny appearance at room temperature is another indication of a good diet. On the other hand, inner fat that is completely white would be indicative of a short maturation period.

To finish this phase, the experts proceed to evaluate the lean meat. The main aspects to consider are:

The first thing to evaluate in this phase is the smell. The components are: intensity (strength of the stimulus), description of the smell and its persistence. This is done by breathing in directly over the sample and is evaluated as medium, low or high. The following descriptions can be considered: Overall, the ham must produce strong, quality olfactory sensations. A high quality ham emanates intense and pleasant smells. Acorn-fed ham has an odour that does not need any comparing, it has it's own unique smell that is not found in any other ham or meat product.

As for aroma, it is perceived indirectly. The expert chews the sample for a few seconds and then opens the mouth slightly, breathing in an amount of air that reaches the nose through the retronasal route, detecting stimuli and aromas.

Persistence refers to the sensation that remains in the mouth after chewing and ingesting the slice of ham. Depending on how long it lasts, it is classified as weak (3 seconds), medium (10-15 seconds) or high (more than 30 seconds).

Aftertaste is defined as the olfactory-gustatory sensation that appears after having swallowed the ham and that differs from the sensations perceived when the ham was in the mouth.

Currently, to name the complex olfactory sensation that is perceived through the nostrils and the palate when chewing, experts have coined the term "flavour", which is evaluated according to: The texture is also analysed while chewing. The texture of the fat in Iberian ham has qualities that distinguish it from other breeds, with a very soft texture that is much better compared to other hams. The fluidity of the fat is also greater due to the high lipid concentration.

On the other hand, the following is evaluated in the texture of the lean meat:

Dryness: determines the degree of wateriness in the ham. The temperature, relative humidity, curing process and weight of the piece significantly influence its water content. The ideal humidity is less than 45%.  Finally, the flavour or taste is evaluated, which is the set of olfactory and gustatory properties that are perceived during the tasting. The most well-known flavours are:

What other factors intervene in the final sensory quality?

Genetics, breeding and type of diet. The breed and intensive or extensive production method, as well as whether or not the pig is castrated, are all factors that are closely tied to sensorial quality. The same goes for the feeding model: free-range and acorn-fed, free-range and grain-fed, or commercially reared grain-fed pigs. In the extensive system, feeding is usually based on grass and acorn during the final fattening phase, which has a significant influence on the type and percentage of intramuscular fat and positively contributes to the aroma and the appearance of pleasant aromatic notes, and a more reddish colour of the meat.

Weight and age at slaughter: Being slaughtered later on at a higher weight produces hardness in the meat; something that also occurs with castrated pigs.

Slaughter. Slaughtering the pig in towns that are located close to the meadows where they have been raised is essential in preventing or minimising the stress produced by transporting the animals, which significantly impairs the final result and the excellent quality of the Iberian ham. 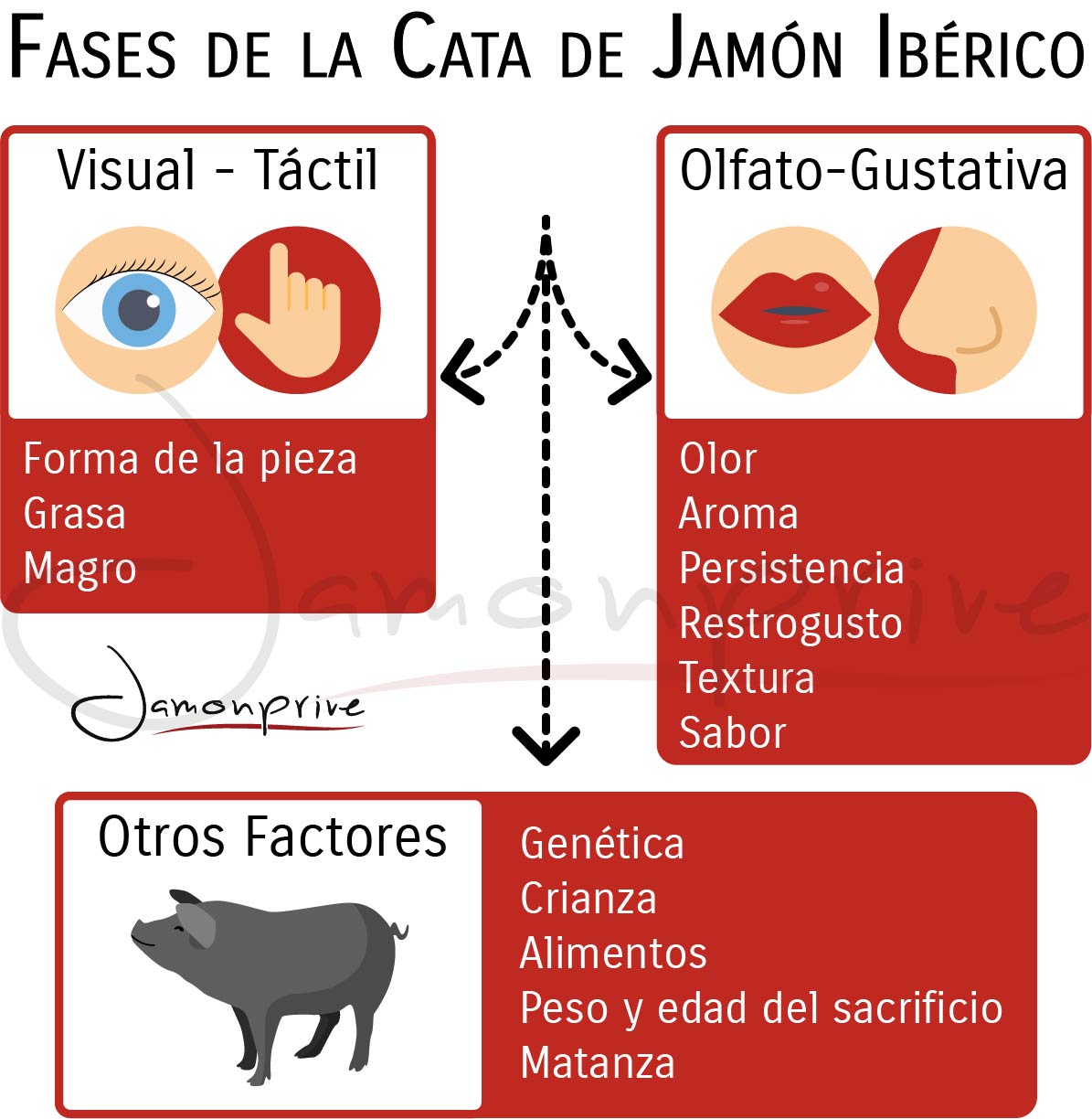