Spanish Ham is a food that's present in virtually every Spanish household, regardless of the specific culinary traditions of regions and individuals. Let's look at the most important areas ham actually comes from, though - the parts of the Iberian peninsula where ham and Iberico ham is actually made.

According to AECOSAN, there were more than 18,000 establishments involved in the production and processing of ham in Spain in 2013.

AECOSAN went on to report that in Spain, 31% of all meat products consumed are ham and pork. While that's crucially important from an economic point of view, it also reinforces the place of ham as a centerpiece of Iberian cuisine.

Without going into the various grades of quality that are available on the market, it's obvious that areas with more producers are to be found in the areas with the best pastureland.

In Spain that means looking around Salamanca, Extremedura and Andalucia, which together account for up to 40% of registered producers. This finding could lead us to think that 40% of the hams sold in Spain are premium, acorn-fed Iberico, but as we'll see, this is far from true. 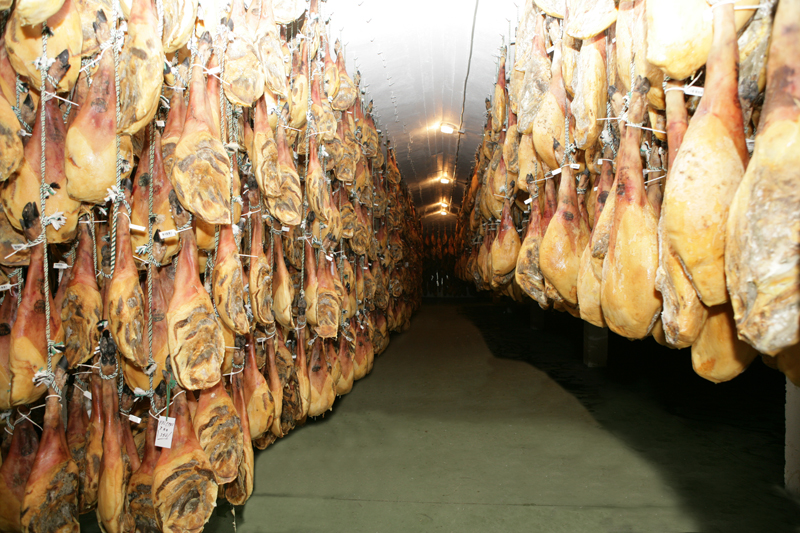 Throughout Spain, there are some areas whose main economic engine is pork production but which are not producing Iberico products.

These are to be found in Aragon, Castilla y Leon, Murcia, Castilla La Mancha, Catalonia, Asturias, La Rioja, and Navarre, as well as in specific provinces like Granada, where Trévelez and de Teruel ham is made, both protected by the DOP (Protected Denomination of Origin) scheme.

The Spanish hams produced in these regions come mostly from white Duroc pigs, and generally these major production areas exhibit some common features: a dry climate with low humidity and cool nights, suited to curing hams, is the main one.

The only regions that do not have ham factories and drying facilities are the Balearic Islands and the Canary Islands, as well as the provinces of Lleida, Alava and Guipuzcoa, where other types of sausages and meats are produced, which have gone some way towards making these areas famous gastronomically in their own right.

Returning to the major provinces of Iberico ham production, it's important to note that not every ham from these areas is of the same quality, but Iberico ham can only come from these provinces.

As a result, the provinces themselves tend to specialize in quality, and AECOSAN reports that 94% of the hams sold in these areas are Iberico hams, made with pork from at least 50% Iberico pigs.

Not only must the pigs be 50% Iberico but they must be first-generation hybrids whose other parent, the sire,must be 100% Duroc.

However, many of these pigs are then fed on modern diets or on a hybrid feeding regime that includes both modern feeds and traditional pasturing.

It's important to remember we can only speak of acorn-fed Iberico ham if the animals are Iberico, and have been reared and fattened exclusively on the 'montanera' feeding regime, which consists entirely of free range grazing on traditional mountainside pastures, resulting in a high proportion of acorns in the diet, influencing flavor, texture and nutritional content.

Don't be fooled: look for the "100% acorn-fed Iberico" label, and offer your guests a Spanish ham like none they've ever tasted before!